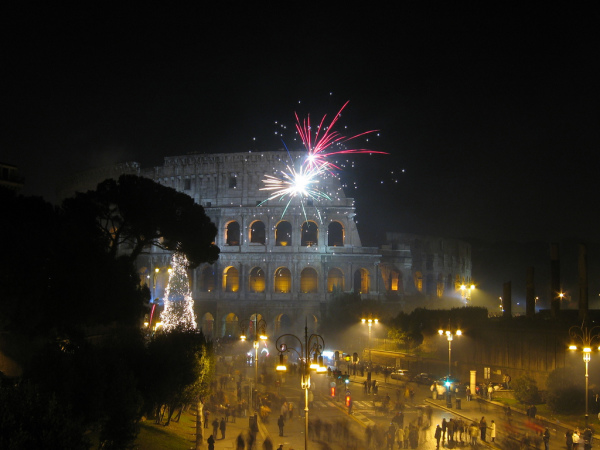 Italians love their holidays – and when that holiday calls for blowing things up, they get even more excited. New Year’s Eve in Italy is one of those holidays, so if you like fireworks you’re in for a treat.

Whereas Christmas in Italy is very family-oriented, New Year’s Eve is much less so. The things most Italians look forward to about the holiday are public, which means anyone can join in the fun. 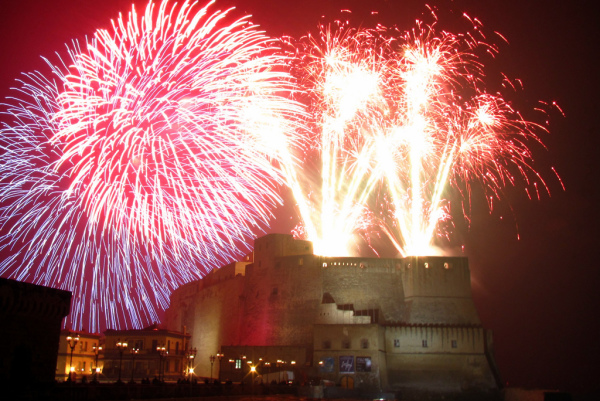 On New Year’s Eve, to celebrate St. Sylvester’s feast day, many Italians will get together with family and friends for dinner. Christmas dinners are very traditional in Italy, and New Year’s dinners are, too – the meal will always feature pork and lentils. Pork is meant to represent how rich life is, and lentils symbolize money (they’re supposed to seem like little coins) – eating them on New Year’s Eve is thought to bring the diner prosperity in the coming year.

Fireworks at the Colosseum in Rome – now that’s a memorable way to ring in the year.

Dinner is, of course, just the beginning of the festivities. After the meal, Italians head into the streets. Some of them go to organized outdoor concerts (there are often several to choose from in big cities like Rome) or special performances indoors, while others just head for the main squares. As mentioned, Italians love fireworks, and New Year’s Eve is one of the biggest fireworks nights of the year, turning an otherwise not-terribly-important holiday into a big event for many.

A little flooding doesn’t stop the revellers in Venice.

Most cities and towns will have official fireworks shows (usually in the same location as one of the outdoor concerts), but just about anywhere you go you’ll also see smaller groups of people with their own cache of firecrackers, lighting up small courtyards or side streets. Fireworks are beloved throughout the country, and also seem to grow in popularity as you go south – the displays in Naples, for instance, are likely to be much bigger and more widespread than in Milan.

Here’s a video showing New Year’s Eve fireworks in Naples – you can watch the displays all over the city, until the whole sky lights up. The videographer says the show goes on for an hour or more – this video is only fifteen minutes long.

One of my favorite New Year’s traditions in Italy involves underwear. Yes, really. Italians are a superstitious bunch, and one of their beliefs involves wearing red underwear on New Year’s Eve (and, obviously, into New Year’s Day) to bring good luck in the new year. Walk through any Italian market in the weeks leading up to December 31 and you’ll see an abundance of red skivvies for sale. Join in the fun – buy some for the whole family!

Traveling in Italy Around New Year’s 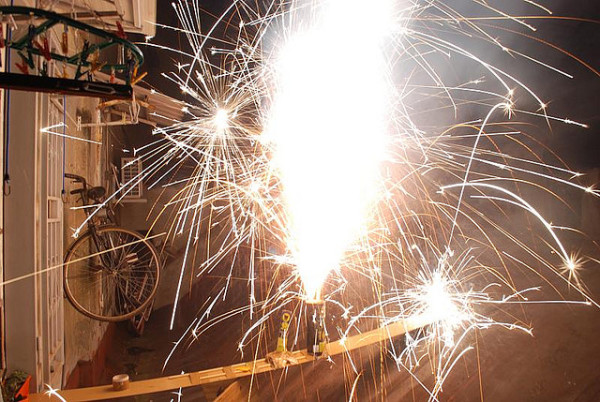 While New Year’s Eve isn’t one of Italy’s primary holidays, it can still cause a few travel headaches if you’re not prepared – not least because it’s sandwiched between two very important holidays – Christmas and the Epiphany.

Winter is Italy’s low season as far as tourism goes, but the winter holidays always cause a spike in the cost of things like airfare and accommodation. Crowd levels go up, too, as people treat themselves to vacations in festive places. Even if you’re normally a last-minute planner, you’ll want to look into booking accommodation well in advance, lest all the hotels in your price range are booked by the time you start looking.

December 31 is not a public holiday in Italy, but January 1 is. This means some attractions, shops, and restaurants will be closed and transportation will be operating on a holiday – read “limited” – schedule. As long as you’re laying low on January 1 and not planning to travel from one city to another that day, you’ll be fine. If that’s a travel day for you, however, book your transportation in advance, too – fewer trains and buses operating means fewer available seats on every route.

It’s also worth mentioning that if you’re not the stay-out-all-night type of person – and don’t plan to give it a try in Italy on New Year’s Eve – then you would be very smart to get a hotel room the night of December 31 that is as sound-proof as possible. Ask for an interior room, if a hotel has them. The official fireworks shows don’t go on all night, but you can’t say the same thing about the myriad smaller displays. Those firecrackers going off in neighborhoods all over the city are loud – light sleepers risk not getting much rest if they don’t take care with their room placement. Of course, if you can hack it, the best option is to get a midday nap and plan to enjoy the fun until the Italians call it a night (somewhere in the wee hours of January 1). Oh, and stay alert when you’re walking around after dark – you never know when you’re going to turn a corner and walk into a mini-fireworks show. 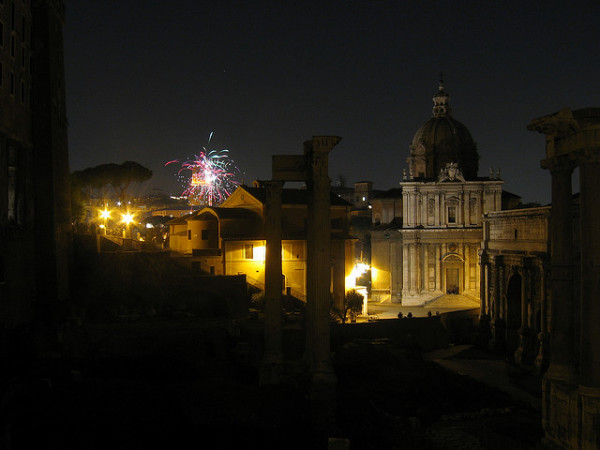 One response to “New Year’s Eve in Italy”